What is OLED in Televisions?

OLED in televisions means a screen built on a matrix of organic light-emitting diodes. Because of the name of these displays, the entire television is named “OLED”.

Everyone has heard the names OLED, QLED, NanoCell, and Triluminos, which are associated with the latest technological advances in television technology. Only organic light-emitting diodes (OLED) can be called a real revolution, while other technologies are modifications of the conventional LCD panel.

Few people know that OLED technology is several decades old. For the first time, it was talked about in the seventies of the last century, and the practical application it received in 1987 by the well-known manufacturer of photo equipment Kodak. Televisions were out of the question then. Later, all developments related to OLED were sold to the Korean LG.

Almost 20 years later, in 2004, the first TV was on organic light-emitting diodes. Of course, as with any new technology, OLED faced many main problems: high cost and short life.

It took another six years to fine-tune, and in 2010 LG introduced its first thin 15-inch OLED TV. And just two years later, the then-record huge 55-inch TV was unveiled.

In 2013, the development of the technology was dealt a severe blow when Panasonic and Sony announced that they were abandoning further research and expressed doubts about the commercial success of OLED. Samsung also stopped producing OLED TVs due to profitability problems.

And only LG continued to invest in development. This firm turned out cost-effective and high-quality matrices on organic LEDs.

Since 2017, all manufacturers of their TVs buy OLED screens from LG Display.

The display of a modern OLED TV consists of a black background, an OLED matrix, a color filter, and glass with a polarizer.

The OLED itself is several thin layers of organic molecules (polymers) between positively and negatively charged electrodes. Applying a voltage causes the particles to emit light. This eliminates the need for additional backlighting.

Some manufacturers have tried to use three subpixels of different RGB colors when creating a pixel. With this manufacturing technique, the reject rate was too high. It was impossible to create three LEDs of red, blue, and green with the same characteristics. The intensity of the luminescence of each color LED changed over time in its way. It was impossible to adjust the color balance for the lifetime of the TV.

LG took a different path and began to use white LEDs (hence the more accurate name for the technology — WOLED) in combination with a color filter. This allowed the production of a large number of high-quality panels with a uniform glow over the entire area. After all, all LEDs are white and change their characteristics over time in the same way.

OLED technology competitors gladly tell us about its disadvantages.

Pixel burnout is the main drawback for potential OLED buyers. The unpleasant defect appears in place of a static image element, for example, in place of the logo after switching channels.

The problem is a bit exaggerated and is typical for displays used for commercial purposes (where one informational or advertising clip is looped in). The average user is unlikely to encounter this, the more so manufacturers have long learned to deal with this drawback, using various systems of protection against residual images.

LG’s OLED TVs have Pixel Refresher technology, which automatically activates after the device is turned off. “Refresher” lasts 10 minutes, and many owners are not even aware of its existence. After 2,000 hours of TV viewing, the “long-term” version of Pixel Refresher kicks in. The operation takes about an hour, during which time the TV is forcibly turned off.

Damaged storefront samples, which opponents of the technology like to talk about, are most often the result of improper operation. Large stores often turn off televisions in one motion, with a switch. And OLED TVs do not have time to perform the above procedures before turning them off.

Unnatural colors are the second reason organic LEDs are criticized. Due to the infinite contrast OLED displays look super rich and sometimes unnatural. However, nothing prevents using a huge number of settings and making a comfortable picture for your eyes.

Brightness — opponents of the technology cite it as one of the main drawbacks. Although organic LEDs are almost unlimited and can reach 100,000 nits, manufacturers tend to limit the value to 700 nits, to extend the life of the product. In modern OLED TVs, brightness can be more than 1,000 nits.

The high price is the last significant drawback, which is hard to shrug off. Even though OLED TVs have become a lot cheaper over time, they remain at the top of the price list. OLED options in the mid-price segment simply don’t exist.

Quantum dots are nanoparticles made of special semiconductor materials that begin to glow after a light flux hits them. The color of the luminescence is determined by the size of the nanocrystals.

Most often, manufacturers apply quantum dots to the backlight or add them as an additional intermediate layer.

Such a filter removes parasitic shades and purifies the light emitted by diodes. The frequency spectrum of the light flux of a particular color is obtained narrow, and this indicates the purity of color, without halftones.

Each key manufacturer of TVs on quantum dots has its commercial name for them:

Samsung is betting on this technology, completely abandoning television OLEDs.

The advantages of devices on quantum dots are better color rendering (almost 100% coverage of the color space DCI-P3) and energy efficiency.

There are also disadvantages.

The second disadvantage is the price, which in premium models is comparable to the cost of OLED TVs.

And due to the format war, Samsung TVs (including QLED) do not support HDR format — Dolby Vision, giving preference to its own HDR 10+.

What is OLED TV

What is OLED in Televisions? OLED in televisions means a screen built on a matrix of organic light-emitting diodes. Because of the name of these 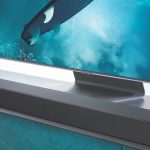 How To Choose a Soundbar

Soundbar For Home: How To Choose The Best Model Soundbars are responsible for reproducing clear, beautiful sound. Knowing how to choose a soundbar, you can

Crystal UHD vs QLED Which is Better? “Crystal UHD” and “QLED” — these two designations are marketing names for groups of TVs in the Samsung